Don’t Get It Right Fear, Regret, and the What If

I have recently been working on some mindset practices in an attempt to turn some things around in my life. I am happy professionally, at least for the most part. Let’s be honest, until I am writing full time, I never will be. I am happy in my personal life, my family and friends are the greatest anyone could ask for. However, financially? Physically? I believe they could be better. The challenge there, is how in the world can I change the way I think about it?

The mind is a powerful force. So powerful, in fact, that it can make us believe things that are simply not true. It can cause us to hear things, see things, and fear things that aren’t there. So, what is the best way to alter that for the better? My answer was Carol Dweck. Carol wrote a book called Mindset: The New Psychology of Success. Now, instead of giving you the shorthand of the book, it would be a futile attempt akin to translating French. However, I can give you the core idea that I got out of it. Fixed Mindset vs. Growth Mindset.

This is such a simple idea in theory that I was almost angry that I couldn’t figure that out on my own without buying the book, but I guess there are certain things, that seem mundane and simple because of our society, that we take for granted. For instance, fire seems like such a simple thing when you have a lighter. Try starting one in the wild and you change your mind. A simple thing becomes mind boggling.

The idea of a fixed vs growth outlook is best illustrated with a picture in the book. This really made the idea something that I could grasp, helped me understand the ways in which I am a fixed mindset. 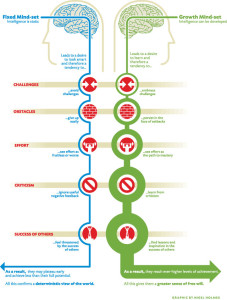 I noticed that I, like most I would assume, are a mixed version of both. In certain areas of my life, professionally and personally, I am a growth mindset. I see every challenge as an opportunity. I am never satisfied with the idea that something can’t be changed or improved.

In other areas of my life, like finances and fitness, I am most definitely a fixed mindset. I find myself saying things like “This is what I make, no use in worrying about it.” That inevitably caused sayings like “I can spend this today, I can always make more money.” While there is a truth to those sayings, there is also a crippling factor.

The point is that I have begun to rethink how I approach some things in life and I encourage everyone, whether you think you are a growth mindset or not, to pick up the book and evaluate it. I will leave you with the words of someone much smarter than I.

“We cannot solve problems with the same thinking that was used when we created them.”